How close are we to living in a robot world?

Tom Renn, Managing Director of Manchester Science Partnerships explores “How close are we to living in a robot world?”

As technology advances and our fictional obsession with robots continues, it seems natural to ask about how close we really are to living in a Metropolis, Matrix or I, Robot world.

The word ‘robot’ was first coined in 1920, coming from the Czech word ‘forced labour’. But since then, technology, industry and our use of robots has come a long way. Why do we have robots, what do they do and will they ever really surpass their human creators?

To explore what the future really looks like for humans and robots living together, Manchester Science Partnerships (MSP) joined with the Museum of Science and Industry for this year’s Manchester Science Festival, bringing together a panel of experts working in robotics, computing, data and biomedical technology. We asked: How close are we to living in a robot world? 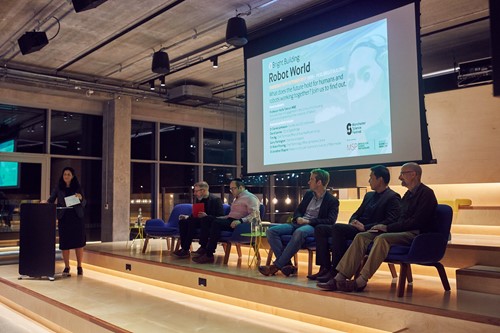 What are robots and will they take over our jobs in the next 20 years?

Opening the debate with our five panelists was Dr Robin Pinning, Chief Technology Officer at the Science and Technology Facilities Council’s (STFC) Hartree Centre. Dr Pinning explained that not all discussions around living with robots are scary ones.

When we talk about robots, often we include talk of Artificial Intelligence (AI). AI is a computing concept that attempts to give computer programs human-like intelligence to perform a task.

In what used to be a niche activity, we now routinely utilise AI in everyday tasks. As soon as we pick up our mobile phones, search on Google or need our satnavs we use programmes that help us complete a task that would otherwise require human intelligence.

Robots on the other hand are programmed specifically to perform a task, often repetitively,  that humans might not be able to do themselves. For example, we commonly use robots of this type to identify complex algorithms or in manufacturing industries, such as automotive.

Taking the car industry as an example, robots have been used for decades to help lift and arrange heavy car parts. This is far from the fear stories we hear about robots taking over our jobs -  robots can be used as an aid, helping with physically demanding jobs, or removing tedious, complex or unsatisfying tasks from our daily work lives.

Recently, high-technology powerhouses joined together to create ‘muscle robots’ that could remove nuclear debris from the Fukushima nuclear power plant in Japan. These robots were designed specifically to work amid intense radiation, something that humans could never do without significant safety risks. 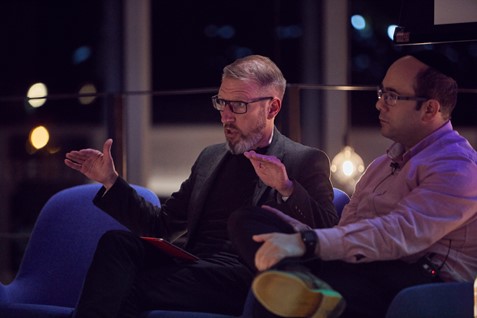 David Levine, CEO at DigitalBridge and MSP customer, said it is not a question of when will robots take over our jobs in the future, but what can robots and humans do better together to increase efficiency and productivity in the workplace? Of course, a robot might be better at physically lifting and arranging objects for 12 hours straight because it has been programmed to do so, but it won’t have the creativity, common sense or emotion that humans have to theorise, discuss and plan ahead.

What effects has AI had so far in your industry?

Another business based on Manchester Science Park, Dr Dan Jamieson, founder and CEO of Biorelate, spoke of how robots have been helping us in certain industries for many years. He talked of already seeing the benefits of programming AI to make sense of data from lengthy scientific publications and feeding this data to drug companies to help in the development of new medicines.

AI is also used to crunch large amounts of data in Internet of Things and computing industries, which would be too long or complex for humans to do on their own.

It was widely agreed amongst the panel that robots and AI have a positive effect on industry by acting as highly complex tools to complete specific functions. As we look to the future, we are already seeing the effects micro robots could have on cancer treatment, reducing the detrimental effects of chemotherapy and enabling those affected to live a much more normal life through treatment periods.

However, we should be careful in the development of these new technologies...

Dr Pinning emphasised how crucial it is that we have education systems, going back to schools, that prepare skilled people for the future. We need diversity (gender, racial, cultural) in the tech industry to provide diversity of thought, creativity and unique perspective to drive advancements in technology.

In fact, it is these human qualities that will be in great demand in future workplaces as this cannot be provided by machines.

But will robots ever replace humans...?

This is where our love for the fictional exploration of robots taking over their human designers comes into debate. Are we heading towards a world where we have created a Skynet-like company? Will robots ever replace or even surpass their human creators?

Tim Ng, Chief Technology Officer at tele-medicine company Now Healthcare Group, said he has already seen an acceleration towards using AI and machine learning in healthcare with the use of precise surgical machines, but it would never be possible to replace humans. Robots don’t understand medical ethics, have empathy or understand the quality of care needed for humans in different circumstances, so a robot could never replace doctors or nurses. We are the creators and programmers of robots; they are limited by what we teach them.

Dr Jonathan Shapiro, Reader at the School of Computer Science at the University of Manchester agreed, talking about how robots are not sentient beings nor general problem solvers. Robots are fine tuned to solve very specific problems.

Dr Shapiro stated that a robot might be able to generate a more detailed photo realistic image than he, or any human ever could, but it wouldn’t take over his job as a researcher or lecturer because the robot has no capacity for general debate, common sense or seeing the bigger picture - it only knows what it has been programmed to do.

Of course, this doesn’t mean no jobs will ever be replaced. David Levine said that in reality, they already have replaced many jobs in manufacturing industries, and as technology advances, we may see many more examples of this. There has already been talk of the future of self-driving cars, and the likelihood of taxi drivers losing their jobs. This is just one example of how robots might eliminate some human occupations. It is also easy to see how robots could hugely benefit industries such as agriculture, administration and construction as well.

David also spoke of the more frightening  possibilities of robot learning, talking recent examples where online robots have developed their own language in bypassing part of the Google Translate function.

Only recently, some of the world’s leading robotics and AI pioneers signed a letter to the United Nations to call for a ban on the development and use of ‘killer robots’, under which certain drones, tanks and automated machine guns would fall into the robotics and AI category. These experts claimed they ‘could lead to armed conflict on a scale greater than humans could ever comprehend.’ There is clearly a debate to be had on the potential dangers of these robotic machines which don’t have human emotion or empathy, as mentioned before.

On a lighter note, David Levine joked that sometimes the pop-up chat bot that you come across on websites are so frustratingly bad that you actually wish you had been transferred to a call centre instead.

And of course, it doesn’t take much imagination to think about how much worse the performing arts and entertainment industries would be if we replaced humans with robots… 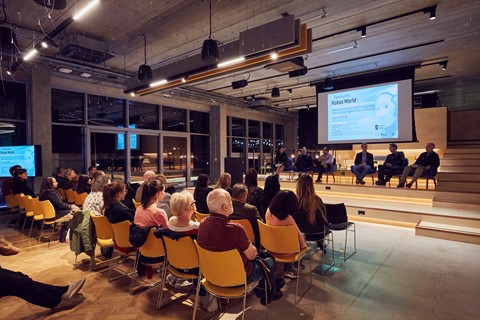 The underlying theme identified by all the panelists was that robots are growing in importance because they are amazing tools for completing complex tasks, but the overarching value within industry and society comes from human creativity, relationships, common sense, seeing the bigger picture and having empathy and emotions - none of which today’s robots are capable of having.

If robots did replace more physically demanding work or jobs that need more precision and detail, this would create new jobs for humans in designing, engineering, maintaining and training in these new areas, or release time for more ‘human’ activities such as creativity and reflection.

As we head into the future, we might see micro-robots used to target specific cancers in humans, reducing the detrimental effects of chemotherapy. We will see more and more data being collected to inform future technologies and digital health solutions. They might optimise our research and solutions to future problems, however it will only ever be these assistive powers that help humans work more efficiently… not take over or replace humans.

Dr Shapiro concluded with an important point - the question is not how robots could take over or replace humans in industry or our daily lives, nor is it how humans can keep above the rise of robots. The idea is to look beyond the fears of a human versus robots world and to rather ask; how can humans and robots work together to be more powerful and efficient than the individual efforts of humans or robots alone.