How can art and science help those living with Alzheimers and Dementia?

Alzheimers and Dementia: Looking Beyond The Scientific Lens

Today in the UK, there are 850,000 people living with dementia. By 2025 this number is expected to rise to over one million. Although dementia can be caused by different diseases that affect the brain, Alzheimer’s disease is usually the most common cause.

Dementia is a disease that is often looked at through a scientific lens. We can learn about the science behind it, point to symptoms, suggest ways to avoid it and talk about the statistics, but how often do we talk about society’s role in helping those living with dementia?

A few years ago we partnered with Manchester Science Festival to bring together leading thinkers, all with a personal perspective on dementia, to ask how art, science and the general public can support those living with dementia. Today, the question is still an important one.

Taking place at Citylabs 1.0 in Manchester, the ‘Together Dementia Support’ choir group gave a wonderful and uplifting performance, getting the crowd to dance and sing along with them. Sally Ferris, Founder of Together Dementia Support, set up the charity after recognising that there is too much focus on what a person with dementia can’t do, rather than what they can do and how society can help. 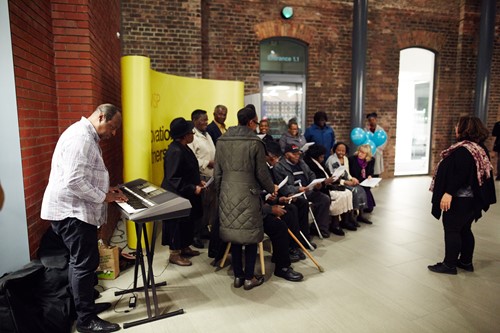 ''Something as simple as a monthly choir is a great way for dementia patients to get out and share in their love of music. It is these stimulating and enjoyable activities that Together Dementia Support provide, making sure that that those living with dementia do not become withdrawn and isolated.’’

After the choir performance, we heard from four thought leaders about their personal experience with dementia and how they are using either the arts, science or both to support those living with it.

Dr Chris Pickford from the Institute for Dementia at the University of Salford, began by explaining the frustrations he came across when looking after three grandparents who lived with dementia. ‘‘Most of the time I was trying to play detective to find out what was wrong, if they had fallen over and how it might have happened.’’

In an attempt to gather more information, Dr Pickford developed a piece of wearable digital technology that would act as a sensor to detect all movement. The small sensor sits on the thigh of the dementia patient to monitor movement and collect data that can establish a behavioural fingerprint of that particular person.

For example, the sensor can track how often and easily the individual can stand up and move around. This data will act as an important indicator for how mobile the individual is, and whether they would be able to live independently.

Alternatively, if their ability to stand is clearly declining, intervention measures could be put in place to prevent them falling over, or to alert someone incase they do. This sensor would ensure that the individual is living in the safest environment possible for them, and solve some of the mysteries that families and carers might come across.

Speaking from a different perspective, we heard from Louise Coulthard, writer of the sell out play ‘Cockamamy’, based on her personal experiences of living with her Grandma who had dementia. ''I noticed that many of the art and plays surrounding the issue of dementia focused more on dementia itself, rather than the person living with it.’’

Cockamamy is not a tragedy, rather it is a ‘tragicomedy’, which not only looks at the individual but at the light side of caring for someone with dementia. Louise’s personal experience with dementia, coupled with her artistic and creative background, help raise awareness about the heart and truth of the disease, rather than the mere statistics.

Next to explore the issue was Dr Ashley Burgoyne - the scientist behind the #HookedOnMusic game, which explores musical memory. Dr Burgoyne talked to the audience about his quest to find out what makes a song ‘catchy.’ Of course, we all have a personal music listening history so everyone is completely unique. But what do we share in common when we find a song catchy?

The #HookedOnMusic game collects and analyses data by letting you listen to fragments of a song, then muting it to test whether you can join back in on the correct note. This data gives scientists insight into how our memory works, which can then be used to trigger memories for therapeutic benefits.

Music was widely discussed as a key tool not only in understanding dementia and memory, but also in supporting those living with it.

Dorothy Allen-McKinley who helps run the gospel choir at Together Dementia Support explained how music gave life and energy to her father before he sadly passed away from dementia last year.

Dorothy spoke about the ‘Alive Inside’ documentary, ‘a cinematic exploration of music’s capacity to revitalise individuals through the simple act of listening to music’. The documentary looks at the ability of music to restore a deep sense of self to those living with dementia. ‘Alive Inside’ has played a significant role in the growing acceptance of the value of music as therapy.

The musical therapy programme developed by creator of Alive Inside, Dan Cohen, has now expanded from three nursing homes to three thousand, going beyond ordinary methods of treatment to bring those with dementia to life again.

Whether it’s technology, music, art, theatre or scientific data, it is important that there is a platform for these ideas to be shared and to inspire new ideas about how to improve the wellbeing of those living with dementia, their family and their carers.

It was a pleasure to host this event at Citylabs 1.0 and be part of this forward-thinking initiative to look at how digital health technology, social activity and the arts can join forces to improve lives. 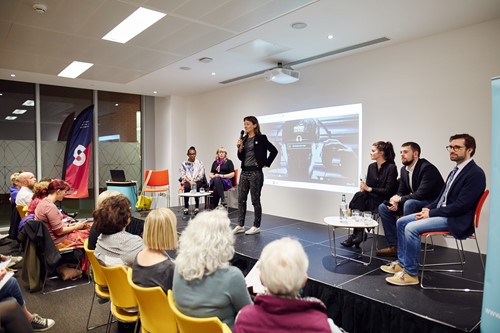 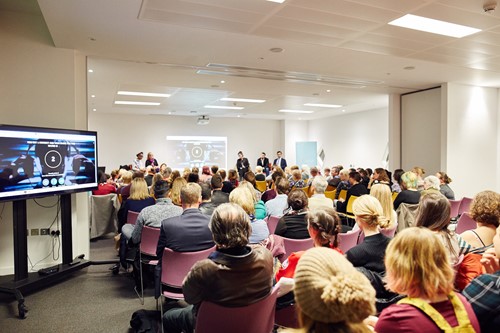